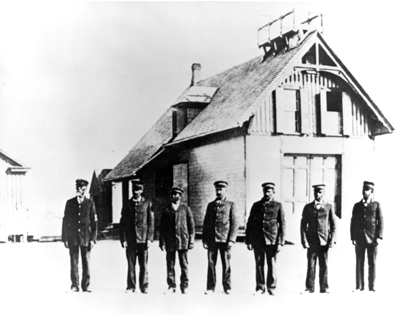 
Richard Etheridge was born a slave on Roanoke Island, where he remained until the island became the location of North Carolina’s Freedmen’s Colony. During the Civil War, he was a sergeant in the United States Colored Troops while he also acted as an advocate and leader in the civil rights movement on the island. Etheridge participated in Edward Wild's raid of northeastern North Carolina.  Etheridge guarded prisoners at Port Lookout, and went on raids in coastal .  In 1864, the unit fought gallantly at the Battle of New Market Heights.  During the battle, former slaves faced Confederate units that contained some of their former owners.  After Lee’s surrender, the regiment served on the Texas-Mexico border before their demobilization in September 1866. After the war, Etheridge became the first black man to lead a lifesaving crew for the U.S. Life-Saving Service at Pea Island station, where he worked from January 1880 until May 1900. Though he was often discriminated against while holding this position, Etheridge became a hero after an incident involving the burning of his station. His surfmen’s successful operations ensured the safe passage of shipping in the Outer Banks.