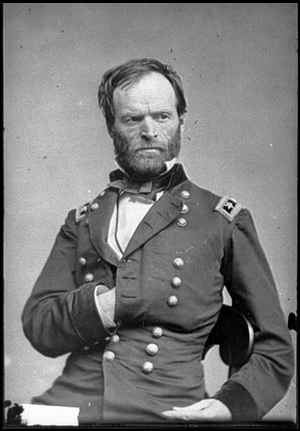 
William Tecumseh Sherman was born one of 11 children on February 8, 1820, in Lancaster, Ohio. After his father died in 1829, Sherman was sent to live with U.S. Senator Thomas Ewing and his family. When Sherman was 16, Ewing arranged an appointment for him at West Point, where he graduated sixth in his class in 1840.  He then saw service in the Second Seminole War in Florida and was later assigned to administrative work in newly-captured California. He married Ewing’s daughter Eleanor in 1850 and held jobs as a bank manager, lawyer, and the first superintendent of Louisiana State Seminary of Learning and Military Academy, where he warned his secessionist friends that war would be long and bloody with the North eventually winning.

When war broke out, Sherman was commissioned as colonel of the Union 13th Infantry. After the First Battle of Bull Run, Sherman was promoted to commander of the Department of the Cumberland in Louisville, Kentucky, where he an illness. After recovering in Ohio, he returned to active duty, seeking to serve with Brigadier General Ulysses S. Grant’s forces. On March 1, 1862, he was given command of the 5th Division of Grant’s Army of West Tennessee and promoted to major general after the Battle of Shiloh. Sherman’s men played a key role in the capture of Vicksburg, Mississippi in July 1863, and Sherman was given charge of the West as Grant was promoted to overall commander of Union forces.  In May 1864, Sherman began to move toward Atlanta, Georgia to take the city under orders from Grant, repeatedly forcing Confederate General Joseph Johnston’s army to fall back until Sherman and his men finally entered the city on September 2 of that year. He went on to Savannah in his famous March to the Sea, capturing it on December 21 and employing his scorched earth policy along the way, believing the South would not surrender until its people were broken. He continued through the Carolinas, burning Columbia, South Carolina in early 1865 and winning the Battle of Bentonville upon entering North Carolina in March 1865. Upon learning that General Robert E. Lee’s forces had surrendered at Appomattox, General Johnston also surrendered, under certain terms from Sherman in April.

After the war, Sherman was given the task of protecting construction of the trans-continental railroads, where he conducted fierce campaigns against the Plains Indians. When Grant was elected president in 1869, Sherman was made Commanding General of the U.S. Army. He retired in 1884, moving to New York. That year he was proposed for the Republican nomination for president, but he refused to run for office. Sherman died on February 14, 1891, and after several funerals, was buried in Calvary Cemetery in St. Louis.