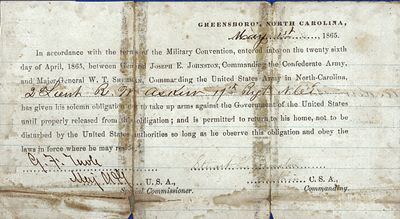 Courtesy of the North Carolina Museum of HIstory


Twenty-three-year-old Richard W. Askew enlisted from Hertford County in Company D, 17th Regiment North Carolina Troops (Second Organization) (Seventh Regiment NC Volunteers) in February 1862. For the next two years, he served in eastern North Carolina and outside Richmond and Petersburg. Sent back to North Carolina in 1865, Askew's regiment joined in the retreat from Wilmington and fought at Wyse Fork and at Bentonville in March. Lieutenant Askew surrendered on May 1 in Greensboro and was paroled.