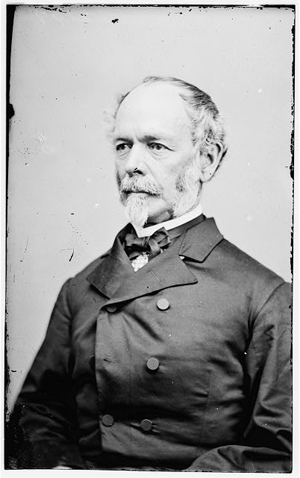 
Joseph E. Johnston was born in Longwood, Virginia, on February 3, 1809. Like many military men of his time, he served in both the wars with the Florida Indians and with Mexico prior to the Civil War. In the spring of 1861, Johnston was commissioned major general of the Army of Virginia. He commanded his men at the Battle of Bull Run and on the Virginia Peninsula Campaign until he was wounded at Seven Pines in 1862 and was succeeded by Robert E. Lee. Upon recovery, Johnston returned to the Mississippi Valley where he opposed Ulysses S. Grant and William T. Sherman, eventually commanding his men in Georgia during Sherman’s Atlanta campaign in 1864. During the fight for the city, Johnston’s men were continually pushed back in bloody skirmishes around Atlanta until the city was taken. Confederate president Jefferson Davis and his cabinet proposed a plan to Johnston to secure their own personal safety and treasures by dispersing his army except for a small guard for the “government” to escape to Mexico. In a display of his sense of honor, Johnston refused to desert his army and refused to keep fighting a hopeless war. Johnston sent a note to Union General Sherman on April 14, 1865, asking to allow “civil authorities to enter into the needful arrangements to terminate the existing war.” Sherman agreed to a conference at Durham's Station, half-way between Raleigh and Hillsboro, to be held three days later at 10 a.m. Johnston admitted that Sherman’s terms were generous, but asked for political guarantees (which the next day Sherman gave) that would restore to all engaged in the rebellion their former social and political rights before the war without punishment. It was instantly rejected by the government and Johnston’s men were given the same terms as General Robert E. Lee’s at Appomattox. After the war, Johnston was in the fire insurance business and was a member of Congress 1876–78. On March 21, 1891, he died in Washington, D.C.