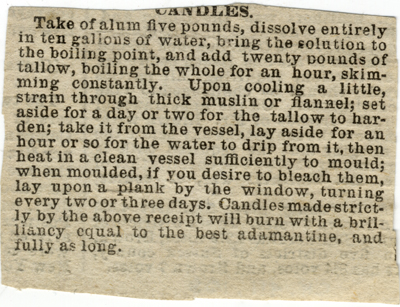 The Union blockade of the South’s coastline pushed the Confederacy to a crisis point. The federal government placed Union ships, called blockaders, along the coast to prevent vessels from bringing supplies into Confederate ports, leaving many communities in need of essentials. The Confederacy used vessels called blockade runners to bring needed goods through the blockade. Residents of the Albemarle region faced the possibility of starvation as food became scarcer and the cost of goods increased with inflation. Goods such as coffee, salt, fabric, and shoes were no longer readily available.

“I have sowe the wheat when you told me. I hope you will get home time enough to advise me about sweet crop.”

Taken from a letter by Ann Bowen of Washington County to her husband Henry Bowen, a Confederate Marine, December 2, 1864.

The absence of men in the Albemarle region brought new hardships for those left behind. Women became the sole caretakers of farms with new responsibilities such as plowing, planting, and harvesting crops. Extended family members were called upon to help. Many schools closed since children had to help with chores once performed by adults. To pass time, children played baseball, ten pins, (clay) marbles, and dolls. 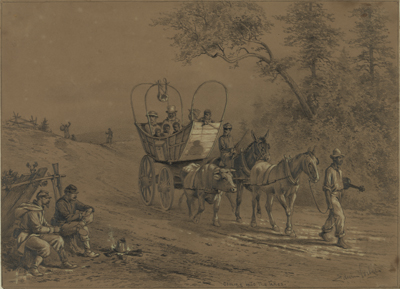 "Coming into the lines. A party of slaves have started for the Union lines."

Courtesy of the U.S. Library of Congre

“…my father and others not knowing what would be the consequences of those that remained, concluded it best to go with the Yankees where freedom was assured...”

Taken from A Brief History of the Slave Life of Rev. L.R. Ferebee, and the Battles of Life, and Four Years of His Ministerial Life. Written from Memory. To 1882. by L.R. Ferebee who was born a slave in Currituck County.

Many slaves escaped to Union controlled areas such as Plymouth and Roanoke Island. Black men enlisted in the Union Army and worked in various capacities including construction and garrison duties. Women found jobs as maids or cooks. Some freed slaves remained on the plantations working as tenant farmers; a few joined the Confederate Army in non-combatant roles.

Effects on Communities from Theft and Pillaging

“The visits of robbery to those having provisions and other valuables in this country are almost a nightly occurrence.”

From a letter of Dr. Godwin Cotten Moore of Mulberry Grove in Hertford County to his brother-in-law Turner Westray of Rocky Mount dated February 8, 1865.

Throughout the war, residents of the Albemarle region who remained at home dealt with issues such as constant theft and destruction of property. Both sides, Confederate and Union, were responsible for taking what they wanted, from horses and chickens to supplies such as tobacco, beef, pork, coffee, salt, and candles. Union naval parties also raided coastal North Carolina waterways.