“My father was the strongest most influential man in bringing this state into the Union and I could never reconcile myself to repudiate his act and deed.”

“We shall have a long ruinous war and possibly become divided among ourselves.”

Residents of the Albemarle region lived with the reality of Union forces in their neighborhoods, with gunboats and troops posing a lasting presence throughout the war. Despite the state’s allegiance to the Confederacy, Union sentiment in the Albemarle region ran deep and increased as the war continued.

Many soldiers who joined the Union Army fought against their own state, neighbors, and family members. They joined Union regiments such as the 1st and 2nd North Carolina Union Volunteers. Residents from the Albemarle region began to fill these regiments and the division of allegiance became more evident.

“We just heard that the guerillas had attacked the enemy in Pasquotank killing Cox and some others. We hear that the Capt. Commanding in E. City has ordered all the people black and white to report to him, and it is said he intends to compel them to take up arms.” 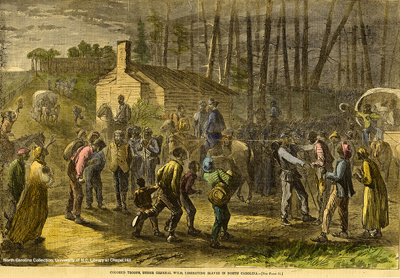 Union General Edward Wild's Men as they Marched to Norfolk

On September 16, 1861, President Lincoln authorized Union troops to recruit volunteers from eastern North Carolina. These recruits for local Union volunteer regiments were often called “Buffaloes.” By joining these regiments, soldiers hoped to remain in the locality and not have to serve outside the region.

Similarly, men from the region also formed Confederate “Home Guard” or “Guerrilla” units to defend their communities and challenge Union control, especially against the constant patrolling of Union gunboats. Violent and threatening activities in the region by guerillas, including capturing Confederate deserters, caused local residents and officials to request a stop to guerilla presence.

“Above all we could not fight with the spirit of war so rampant in our midst.”

Duties, hardships, and death were the realities of a continuous war. After only one year of combat, men were no longer volunteering to join and as a result, the Confederate government instituted conscription laws in 1862. The Confederacy exempted local officials, clergymen, postal employees, pacifist church members such as Quakers, and planters who owned 20 or more slaves. In a few cases, residents paid someone to take their places. Conscription was also avoided by hiding and seeking refuge in the woods and swamps.

Next – 1864 Confederate Decline»«Previous – The Home Front