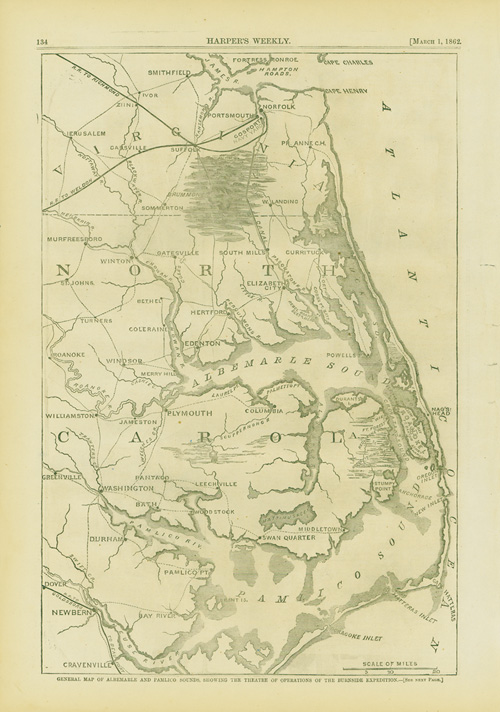 General Map of the Albemarle and Pamlico Sounds, Showing the Theatre of Operations of the Burnside Expedition, Harper's Weekly, March 1, 1862

Courtesy of the Museum of the Albemarle


Charles Henry Foster was a newspaper editor from Murfreesboro, North Carolina and Marble Nash Taylor was a former minister in Cape Hatteras. Foster enlisted in North Carolina 2nd Regiment of US Volunteers in 1861. Along the way he met Marble Nash Taylor and they went to New York and Washington, D.C., to begin establishing a provisional government in eastern North Carolina due to the large presence of Union troops in the region. A convention was called in North Carolina resulting in the retracting of the Secession Ordinance and the election of a new governor and members of Congress. In a letter to President Abraham Lincoln, Taylor wrote,

“That the office of Governor of this Commonwealth having been vacated by the death of John W. Ellis and by the active treason to the Union of his Constitutional Successor Acting Gov. Clark therefore Marble Nash Taylor be hereby appointed and declared Provisional Governor of North Carolina,”

and even signed the letter with that title. However, the election was fraudulent and no one was seated in their elected positions.