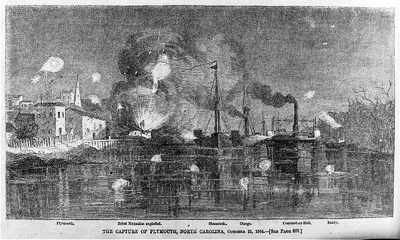 The Capture of Plymouth, North Carolina

Overwhelming odds throughout 1864 and into 1865 resulted in losses that left the Confederacy crippled. Regional campaigns such as those at Windsor in Bertie County and Fairfield in Hyde County occurred in early 1864. Confederate forces captured the town of Plymouth in April. In October, Union troops retook Plymouth, sinking the CSS Albemarle.

In mid-1864, fighting in Virginia resulted in large numbers of casualties for both sides. Fighting at the Wilderness and Spotsylvania occurred in May along with the Battle at New Market. The Richmond-Petersburg Campaign (battles fought June 1864 to March 1865) involved trench warfare between Union troops commanded by General Ulysses S. Grant and Confederates commanded by General Robert E. Lee. After the nine-month siege, General Lee abandoned Richmond and Petersburg and began the retreat that led to his ultimate surrender.

Next – 1865 & the Return Home»«Previous – Divided Allegiances