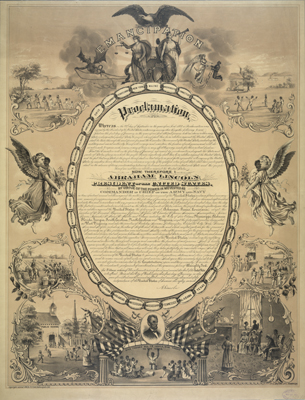 “Once let the black man put upon his person the brass letters ‘US,’ let him get an eagle on his button and a musket on his shoulder and bullets in his pocket and there is no power on earth that can deny that he earned the right to citizenship in the United States.”

Frederick Douglass, August 1863. Quote is now a part of The Promised Land Marker near Manteo in Dare County on Freedman’s Colony Road.

The Emancipation Proclamation was issued in January 1863. It gave freedom to all slaves within the states or parts of states that were in rebellion against the United States. However, the proclamation left over one million people within Union territory as slaves. It also allowed blacks to serve in the Union Army. More than 1,200 black men from the Albemarle region joined the Union’s army or navy during the war.

A Freedmen’s Colony on Roanoke Island

“…many of the adults are eager to be taught to read and write, and will not be denied…” 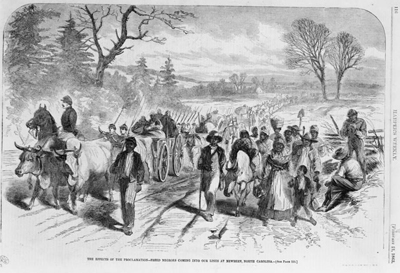 Horace James, describing a freedmen's colony established on Roanoke Island as reported in the Annual Report of the Superintendent of Negro Affairs in North Carolina 1864.

After Union soldiers took control of Hatteras and Roanoke Island, black families from the region sought refuge. In 1863, the United States government established colonies and camps as a solution to the overwhelming number of slaves fleeing to Union occupied areas such as Roanoke Island, Plymouth, Washington, and New Bern.

“I know my gallant Regiment will do their duty—where is my sword?”

Colonel Henry K. Burgwyn’s last words before his death at the Battle of Gettysburg. 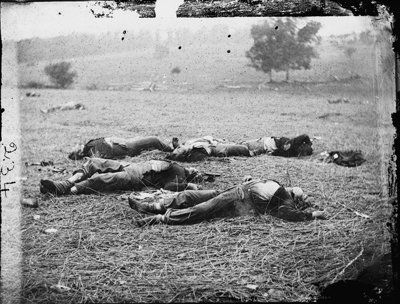 “It was a hot day. I tried to drag myself to some shade, but couldn't for all the other wounded and dead laying around. Flies were beginning to blow it, so I tore a piece of my shirt off and wrapped the wound. It was about sundown when they, the Yanks, picked me up off the field. I thought they could have saved the leg if they had picked me up earlier.”

Private Isaac Byrum, Jr. referencing his wound (with eventual amputation of his leg) received at the Battle of Gettysburg.

In 1863, soldiers on both sides experienced deadly defeats along with spirit-raising victories. Confederate victories occurred at Chancellorsville, Virginia, and at Chickamauga, Georgia, and defeats occurred at Vicksburg, Mississippi; Gettysburg, Pennsylvania; and Bristoe Station, Virginia. On the battlefield, both Union and Confederate sides suffered heavy casualties. Regional skirmishes occurred in areas such as Boone’s Mill in Northampton County and Edenton in Chowan County.

Next – The Home Front»«Previous – A Soldier's Life