At an average age of 23, men from across the state, including the Albemarle region, began volunteering for the Confederate Army in 1861 with some soldiers resigning from the United States Army to serve in the Confederate Army. Regiments organized at county courthouses with companies often comprised of men from local neighborhoods.

“We returned the shots until we had no ammunition, then retreated under the heaviest shelling any man ever saw; we were compelled to run and fall at almost every step to escape the fragments. Some of our men were killed, some wounded, some cut off.”

Taken from a letter written by Captain John B. Fearing to his wife Emily regarding the fighting at Fort Hatteras. 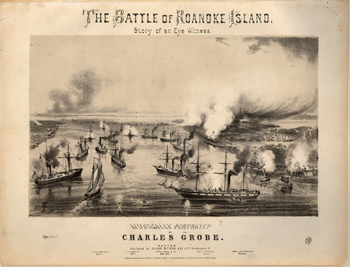 The Battle of Roanoke Island

“Our artillery ammunition having been exhausted and our right flank having been turned by an overwhelming force of the enemy, I was compelled to yield the place [Roanoke Island].”

Courtesy of the Naval Historical Center

“…with a detail, to aid the citizens in destroying the place by fire, as I [Henningsen] had been requested to do so by some of the most prominent of them.”

Confederate Colonel C.F. Henningsen’s statement regarding the burning of Elizabeth City in February 1862.


On August 28, 1861, the Union Navy bombarded Forts Clark and Hatteras, key defenses for the Albemarle and Pamlico Sounds and used by Confederate forces as bases of operation for their blockade-runners. With the arrival of 7,500 Union troops and 100 vessels at Roanoke Island on February 7, 1862, Confederate troops were forced to surrender, giving control to the Union. On February 10, the Confederate Navy’s Mosquito Fleet was destroyed during the Battle of Elizabeth City, leaving the city undefended. Union troops then headed to Edenton and occupied the town for several hours. Later in the month, Union forces shelled the town of Winton. Fearing the Confederacy’s use of the Dismal Swamp canal locks to transport goods and vessels, Union troops set out to destroy them. The Battle of South Mills was fought April 19, 1862.